I keep meaning to post an update on my May goals list and I keep getting lost in Diablo 3. Not sure how I end up there instead of here, but it keeps happing. Tonight my husband is supposed to be playing with my brother and friends, so I figured I'd get some time to post about my completed May Goals. So far, he's not playing with anyone though, so not sure how long I'll be here, so I better get down to business!

May's goals were to finish my desk, which you saw in a previous post. I love it. I am now going to paint a small wood bookcase the same color and put it in my crafting area. I am also going to line the drawers with fabric since I cant find any contact paper I like. I found a nice tutorial at Infarrantly Creative. I have the fabric I want to use already in my stash and I made an emergency run to Joann's today to get the fabric Modge Podge. Maybe I should put the bookcase and the drawers in my June Goals instead of the other stuff I put up. Hmmm.

My next finish is the cover for my husband's chair. He's a big Star Trek and Big Bang Theory fan. So in the BBT episode where they have a Gorn sitting in Sheldon's seat, my husband went crazy. I knew I had to somehow stitch this up for him. I found a cute little cross stitch Gorn designed by Black-Lupin on Deviant Art.  It says "No, Gorn, No! That's where I sit." which is the quote from BBT.  I think it came out pretty cute and the husband loves it. 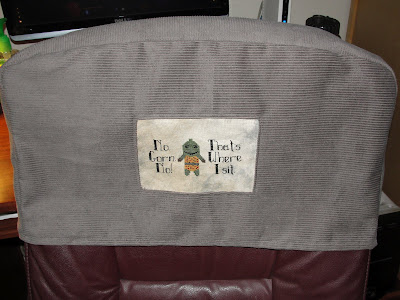 I dont have any pictures of my progress on Growth Rings.  It wasnt too much anyway.  I've not been stitching anyway.  Another reason for no pictures is that my camera cant decide if it wants to work or not.  Today, it doesnt.  Thankfully it did when I was taking pictures of the other items.

My last May goal was to do something small.  I didnt have anything in mind when I posted that goal.  I just like to have it in there, just in case.  I really love this last one though.  I think it was a stroke of genius!  Well, crafting genius!  Ok, probably not genius, but clever?  Anyway, my cousin loves to do origami.  He makes these cute little dragons that are about the size of a quarter. I have 2 of them and they've been stashed in a plastic toothpick container since I know my cats would just love to eat a couple of little dragons.  They didnt seem happy in the container...the dragons, not the cats.  So I decided to repurpose my husband's dice box he had.  I knew that the dragon needed a hoard, cause that's what dragons do.  So I made him a hoard of gold, silver and gems...or as they are known in the crafting world, seed beads and bugle beads. I also added a little sword bead I had laying around.  He's quite happy now.  I just need to make his sister a hoard as well so she'll be happy too.  I think I'll make her's a little girlyer though. 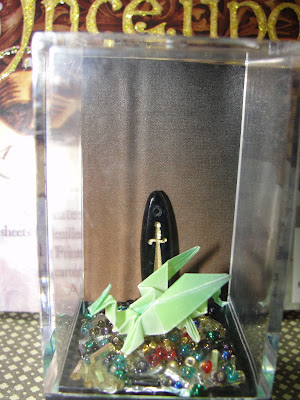 And here's a pic with a quarter next to him so you'll get an idea of his size. 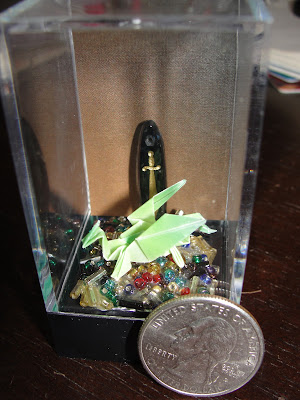 Adorable, yes??  I think he needs a name now.  Maybe that should go on my June Goals as well.  Maybe I just need to scrap the June Goals and start all over. LOL
Posted by Handmade Redhead at 10:08 PM